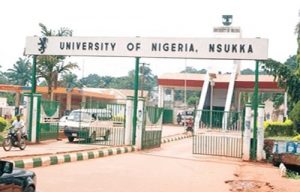 The university celebrated its 50th anniversary on October 2010.

A law to establish a University in the Eastern Region of Nigeria was passed on 18 May 1955. While that date marks the formal beginning of the history of the University of Nigeria, the enactment of this legislation by several Nigerian leaders, and inspired particularly by the then Premier of the Eastern Region, Dr. Nnamdi Azikiwe.

One of the first steps taken by the Eastern Nigeria Government towards the implementation of its commitment was an invitation to both the United States of America and the United Kingdom to send advisers to help in the planning of physical and educational aspects of the proposed university.

Under the joint auspices of the Inter-University Council for Higher Education and Overseas and the International Co-operation Administration (now the United States Agency for International Development), J.W. Cook, Vice-Chancellor of the University of Exeter, Dr John A. Hannah, President of Michigan State University and Dr Glen L. Taggart, Dean of International Programs at the same university, came to Nigeria in 1958. The team surveyed the site at Nsukka, and extensively investigated a great variety of factors pertinent to the establishment of a new university.

The results of their efforts were contained in a white paper issued by the Eastern Nigeria Government on 30 November 1958. They had recommended “that the development of the University of Nigeria based upon the concept of service to problems and needs of Nigeria, is a desirable project and one that should receive support from any source which could help to make it a sound endeavor”.

They further recommended that a provisional council be established to “draw upon the technical and consultative resources available throughout the world for help in planning the institution”.

The provisional council, authorised by the Eastern Nigeria Legislature, was appointed by the Governor in Council in April 1959, and given necessary financial and administrative powers to build a sound university. It reflected the spirit of international co-operation which has given birth to the institution. It consisted of Dr. Nnamdi Azikiwe, Chairman, Dr. T. Olawale Elias and Dr. Okechukwu Ikejiani from the Federation of Nigeria, J.S. Fulton from the United Kingdom, Dr. Marguerite Cartwright and Dr. Eldon Lee Johnson from the United States of America.

The University was formally opened on 7 October 1960, as the climax to the Nigerian independence celebrations in the Eastern Region. Her Royal Highness, Princess Alexandra of Kent, representing Her Majesty Queen Elizabeth II at the Nigerian independence celebrations, performed the opening ceremonies and laid the foundation stone of one of the University’s early buildings.

Classes began on 17 October 1960 with an enrollment of 220 students and 13 members of the academic staff. The opening convocation addresses were delivered by the Chairman of the Provisional Council, Dr Nnamdi Azikiwe, the first President of the Federation of Nigeria, and by Dr John A. Hannah, President of Michigan State University, USA.

The university was fully autonomous, with the power to grant its own degrees. Technically speaking, therefore, it became the first fully-fledged university in Nigeria, since Ibadan was still at that time a university college granting London degrees. It also became the first university established by a Nigerian Regional Government. The University College Ibadan, the oldest degree awarding institution, cut its umbilical cord with London in January 1963, becoming the University of Ibadan. In July 1967, it turned out the first graduates holding Ibadan (rather than London) degrees, by which time Nsukka had produced two crops of graduates and taken all the publicity for turning out the first graduates of an autonomous Nigerian university

LINGUISTICS IGBO AND OTHER AFRICAN LANGUAGES

That’s the much we can take on the topic “Fresh List Of Courses Offered In UNN (University of Nigeria, Nsukka)”.