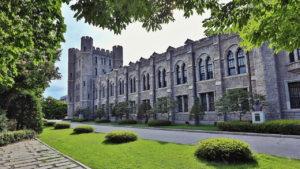 South Korea known as the Republic of Korea is located in East of Asia.

Higher education and education as a whole is taken as almost compulsory in South Korea society, where it is viewed as one of the fundamental heritage of South Korean life.

Academic success is often a source of pride for families and within South Korean society at large. These are the top 10 Universities in South Korea;

Korea Advanced Institute of Science and Technology was established in 1971, it is a national research university located in Daedeok Innopolis, Daejeon, South Korea.

KAIST also has been internationally accredited in business education, and hosting the Secretariat of AAPBS.

KAIST has approximately 10,000+ full-time students and 1,140 faculty researchers , it has over 622 academic staffs, it has an acceptance rate for local students was 14.9%, and for international students at 13.2%, having an enrollment range of 10,000. See more on KAIST with this link kaist.edu.

The university has three campuses: the main campus in Gwanak and the others in Daehangno and Pyeongchang. The university comprises sixteen colleges, one graduate school and nine professional schools.

The student body consists of nearly 17,000 undergraduate and 11,000 graduate students.  Seoul National University is very large having over 20.000 and more students, see more on Seoul with this link www.snu.ac.kr

Korea University was founded in 1905, it is one of the nation’s oldest and most prominent institutions of higher education. The student body consists of over 20,000 undergraduate students and over 10,000 graduate students.

The university has 81 departments in 19 colleges and divisions, as well as 18 graduate schools. It has over 1,500 full-time faculty members with over 95% of them holding Ph.D. or equivalent qualification in their field.

The Korea University Alumni Association consists of more than 280,000 university graduates. Korea University is a large research institution, notable in South Korean history for being the first educational institution to offer academic programs in Korea in various disciplines, such as law, economics and journalism.

It is particularly well known for its College of Law, which is widely considered to be one of the most well-known undergraduate law programs in South Korea.

The institution traces its origins to the historical Sungkyunkwan founded in 1398 by the Joseon Dynasty located in the heart of central  As the foremost educational institution of the JoseonKingdom,  It was restructured into a university in the late nineteenth century, and has since greatly expanded its course offerings, and they are attributed to its numerous influential graduates, strong research output, and close partnership with one of the largest garget company: Samsung .

Being one of the premier universities in the country, SKKU has been consistently maintaining its reputation internationally as well.

The university spends heavily on research and development, mostly funded by its primary sponsor tech-giant Samsung and other agencies.

Among the internationally notable research scientists of the university, professor Park Nam-Gyu of Chemical engineering, who was nominated as one of the potential Chemistry Nobel laureates in 2017 by Clarivate Analytics and professor Lee Young-hee, director of the Center for Integrated Nanostructure Physics in the Institute for Basic Science, are currently active in research at this university, frequently coming into spotlight in Nature. See more on this school with this link

Yonsei University was established in 1885, it is a private research university in Seoul, South Korea. It is one of Korea’s three SKY universities, considered amongst the prestigious Universities.

Yonsei is one of the oldest universities in South Korea. The student body consists of 26,731 undergraduate students, 11,994 graduate students, 4,518 faculty members, 6,788 staff, and 257,931 alumni. Yonsei operates its main campus in Seoul and offers graduate, postgraduate and doctoral programs in Korean and English, the school is affiliated with Christianity, the school is very large having an enrollment range of 30,000- 35,000 students. See more on Yonsel University with this link

Pohang University of Science and Technology was established in 1986, it is a private research university in Pohang, South Korea dedicated to research and education in science and technology. In 2012-2014, the Times Higher Education ranked POSTECH 1st in its “100 Under 50 Young Universities” rankings.

Since its establishment, POSTECH has been maintaining its prestige and reputation as one of the most prominent young research university in the world. See more on POSTECH with this link postech.ac.kr

Hanyang University was established in 1939, it is one of the leading private research universities of South Korea, especially in the field of engineering. The main campus is in Seoul, and its other campus, the Education Research Industry Cluster at Ansan, or ERICA campus, is located in Ansan. Hanyang (한양;漢陽) derives from the former name of the capital Seoul used during the Joseon Dynasty.

The university was established as an engineering institute (DongA Engineering Institute before expanding into other courses in 1959. In 1979 Hanyang University built their second campus in Ansan, Gyeonggi-do, one of the biggest industrial complexes in South Korea. Hanyang University enrolls over 3,000 foreign students each year and more than 3,300 students study abroad annually. See more on Hanyang University with this link www.hanyang.ac.kr.

The university is composed of 23 undergraduate colleges, 1 general graduate school, 13 speciality graduate schools and 49 auxiliary research institutions. The university offers a study abroad program in partnership with 434 sister universities in 69 countries. Kyung Hee University is known for its prestigious College of Korean Medicine, which is considered a leading school in traditional Korean medicine and other traditional Asian medical practices. See more on Kyung Hee University with this link www.khu.ac.kr.

Ewha Womans University was founded in 1886, it is a private women’s university in Seoul, South Korea founded  by Mary F. Scranton under Emperor Gojong. It is at present the world’s largest female educational institute and is one of the most prestigious universities in South Korea.

It is the world’s largest women’s university with nearly 25,000 students and 987 faculty members within 11 colleges, 15 graduate schools, and 66 research institutes. In 2013, Ewha ranked 1st among Korean universities in CWTS Leiden Ranking and in the number of law clerks produced, and produced the highest number of women executives in Korea’s top 100 companies. See more on Ewha Womans University with this link www.ewha.ac.kr.

Sister schools of Sogang founded on Jesuit philosophy include Georgetown University, Boston College, Fordham University, and Sophia University. Sogang gets its highest score in the South Korea rankings for the employer reputation category. See more on Sogang with this link wwwe.sogang.ac.kr.

We hope you found what you were looking for?

Thanks For Coming Around