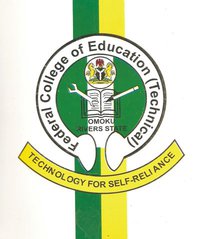 If you have been searching for Federal College of Education Omoku School Fees 2021/2022 FCET Omoku Fees, list of courses offered in federal college of education omoku, federal polytechnic omoku, fcet omoku school fees, rivers state college of education then you are in the right place.

The objectives for establishing the College are as follows:

a) To meet the challenges of national self-reliance in the local production of technology teachers to teach technical, vocational, science, and business subjects/courses in vocational training centres, secondary, and technical colleges.

b) To produce facilities for, and to stimulate students’ interest in vocational teacher education and

c) To establish and develop the Colleges as seminal centres of ideas on the development and teaching of vocational/technical subjects/courses and on the practice of management of technological institutions.

The College therefore runs courses leading to the award of Nigeria Certificate in Education (NCE) in Technical, Science, Vocational, and Business Education on full and part-time basis.

A one-year Professional diploma Course in Education is also available for Graduates in Technical, Business, Vocational, Science and allied subjects who are not professional teachers.

In addition to these regular academic programmes, there is a part-time skill acquisition scheme for youths of the host communities to acquire saleable skills for self-reliance. This scheme has contributed in no small measure to the relative peace the host communities now enjoy in spite of the fact that they are predominantly oil-producing communities with its attendant youth restiveness.

The College took-off in April 1989 at the temporary site provided by the Rivers State Government of Nigeria with the appointment of the pioneer Provost, Chief E.G. Toby. The temporary site was the premises of a Teacher Training College that had been phased out.

A permanent site for the College was acquired in 1997 and work commenced on the development of the site in 1998. The Schools of Vocational Education and Science Education have moved to the new site. It is hoped that other Schools will gradually be relocated to the permanent site and students’ hostels and recreation facilities established there.

Chief E.G. Toby started the College in 1989 as the pioneer Provost and retired in 1996. He was succeeded in 1996 by Dr. K.G. Sowande who acted as Provost till 1998 when he was appointed Provost, Federal College of Education (Technical), Akoka, Lagos. He is now retired. In 1998 Prof. A.M. Wokocha(JP) assumed office in the College as Provost but resigned in 2005 to assume duties as Provost, Rivers State College of Education, Port-Harcourt.

He is now Registrar/Chief Executive, Teachers Registration Council of Nigeria, Abuja. He handed over to Dr. N.S. Oguzor who was the Deputy Provost and who acted as Provost until 2006 when he was appointed substantive Provost, and latter handed over at the end of his tenure to his deputy Dr Bassey Ubong who also acted as provost and was later appointed the provost 2014.

1. All year one students MUST pay their fees and register their courses before the start of the semester exams for the current academic session.

2. Year two students MUST pay their school fees for year 3 before going for Teaching Practice (TP).

Students should by this notice, be adviced and informed in their best interest to pay their school fees before their exams to avoid been penalised.

For more information and inquiries about Federal College of Education (Technical) Omoku school fees 2021/2022, you can contact the school official website or campus.

That’s the much we can take on the topic “Federal College of Education Omoku School Fees 2021/2022 FCET Omoku Fees”.