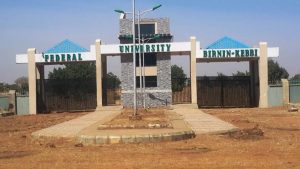 Academic activities began in November 2014 for the 2014/2015 academic session with a students’ population of 507 and academic staff strength of 102. Accordingly, maiden and second matriculation took place on 5 March 2015 and 9 February 2016 with a total of 507 and 972 Undergraduate sworn-in, respectively.

The University currently has three faculties and a College of Health Sciences and offer a total of twenty-four (24) degree programmes. The University has six (6) directorates which include, academic planning, physical planning, research and innovation, ICT Directorate, entrepreneurship and CSBE directorate. The University just recently toward the ends of the year 2017 had the substantive leadership, where the federal government approved the appointment of Prof. Bello Bala Shehu as the new university vice-chancellor; Prof. B.B Shehu is a Medical Practitioner of neural science, he was also the former Chief Medical Director of the National Hospital, Abuja.

That’s the much we can take on the topic “Fresh List Of Courses Offered In FUBK (Federal University, Birnin Kebbi)”.